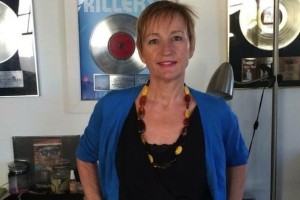 (Los Angeles, CA) – April 11, 2016
Nadine Gelineau, an adored music industry veteran and the founder/CEO of music marketing agency The MuseBox, passed away due to lung cancer on Thursday, April 7 in Los Angeles, according to Billboard Magazine. She was 56. Having worked with a long list of music giants that includes The Killers, Echo and The Bunnymen, and Guided by Voices, Gelineau recently joined forces with industry vets Erik Koral and Andrea Young to co-manage The MuseBox, resulting in what is now The Koral Young Group.
Nadine’s far-reaching music career began in Ottawa, Canada as a DJ at CKCU. She started The MuseBox in 2006, with offices located in New York, Los Angeles, and Ottawa. Her many reputable clients included The Neighbourhood, Echo and The Bunnymen, and The Human League. With an unparallelled passion for music, Gelineau helped promote hundreds of independent artists while making life-long friends with musicians and colleagues. All who encountered Nadine were impressed by her business acumen, sharp wit, and kind spirit.
In January of 2016, Nadine was diagnosed with stage four lung cancer. A GoFundMe campaign on her behalf quickly raised $65,000 by devoted friends, associates, and artists. Coupled with an enthusiastic support group on Facebook, it became clear that countless lives had been touched by Gelineau throughout her long and storied career.
In February of 2016, Gelineau brought in Chief Marketing Officer Koral and Chief Operating Officer Young to co-manage The MuseBox while she received treatment for her cancer. Koral and Young anticipated working alongside Gelineau during and after her treatment, but Gelineau’s health soon took a turn for the worse and she was rushed to Kaiser Permanente Hospital in Hollywood. Within a few days of being admitted, Nadine was moved to the ICU, where she remained until passing away peacefully.
Both Koral and Young hope to honor Gelineau by continuing The MuseBox’s legacy. Koral was “completely flattered” when Gelineau asked him to help run her company. Young, meanwhile, had long admired Gelineau’s “fierce and ferocious commitment to artist development.” In the final weeks of Gelineau’s life, her family gave Koral and Young their blessing to continue Gelineau’s work through The Koral Young Group.
To contact The Koral Young Group, please visit http://www.koralyoung.com